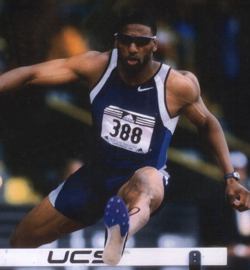 Born on Dec. 1, 1973 in the rural town of Garrison, Texas, Eric lost his father at the age of six years old to a massive heart attack. He and his family experienced first-hand the devastating effect that heart disease, the silent killer, can have on an entire family. This is how Eric's journey began.

Burning Desire To Make His Parents Proud
Watching his mother work day and night to support six children alone was overwhelming, but Eric's mother taught them that focus and hard work would help them succeed at anything they wanted in life. Night after night, Eric wished his father was there to play catch in the yard, teach him how to ride a bike or simply tuck him in at bedtime. But, despite his father's absence, Eric had a burning desire to push ahead and make his parents proud.

Clearing Hurdles in Life
Eric knew he would have an opportunity to put his mother's words to the test when he developed an interest in sports in junior high school. He immersed himself in every activity he could, whether volunteering on the sidelines or becoming a part of the fray as he played basketball, baseball, football and ran track. With his speed and natural ability, Eric knew that if he could clear the hurdles of life, he could make a name for himself despite the obstacles that lay before him.

That strong work ethic and focus paid off when Eric earned a football and track scholarship to Blinn College in Brenham, TX, and was recognized as the "fastest hurdler in the nation" during his freshman year. The following year, he broke the National Junior College record for 400-meter hurdles, and then transferred to Abilene Christian University where he earned All American honors. After deciding to train for the 1996 Olympic Games, Eric was selected as an alternate; and, in 1999, he earned a silver medal in the Pan-American Games.

The following year, Eric's hard work earned him a spot on the U.S. Olympic Team and he competed in the 2000 Olympic Games in Sydney, Australia. In 2003, Eric became the U.S. Champion and earned another silver medal in the Pan-American Games.  For eight years of his 10-year professional career, Eric was ranked amongst the top 10 Track & Field athletes in the world.